Commenting on a new report commissioned by the Government on how autonomous cars could improve traffic flow, RAC spokesman Rod Dennis said:

“While we are still a long way from autonomous vehicles being commonplace on our roads, this report is useful in modelling what the advantages could be as the technology takes off.

“The report recognises that only when there is mass take-up of connected and autonomous vehicles will the benefits relating to traffic flow really kick in. According to the most recent RAC Report on Motoring, 58% motorists believe that fully autonomous vehicles will only outnumber conventional ones by 2050 - and of course there will a period of time with a mixture of both types of vehicles on the road.

“But modelling aside, drivers need to be convinced that a future with autonomous cars is going to be worth waiting for. The Report on Motoring research suggests that motorists will need reassurance about driverless vehicle software reliability, and only 25% agreed that driverless cars will actually reduce the number of traffic jams on our roads.

“Reports like this make a strong case for the Government’s emphasis on making the UK a leader in driverless vehicle technology, but deeper engagement with motorists on the benefits driverless vehicles could bring will also be crucial to encourage their adoption.”

The Department for Transport announced updates to the Highway Code which will enable drivers to use advanced driver assistance systems like remote parking and motorway assist. 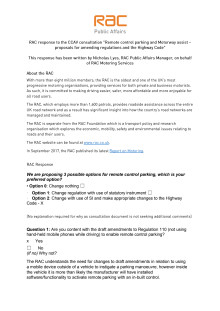 The RAC response to the CCAV consultation, submitted in January 2018