“The Mayor has put forward a bold vision for changing the way residents, businesses and visitors to London will move around in the future – and it needs to be bold given the toxic combination of congestion and air quality that currently blights many parts of the capital. Efforts to tackle one must go hand in hand with tackling the other.

“The Mayor is particularly brave to raise the idea of road pricing. This was mooted some years ago on a national scale and quickly dropped as it was seen as a way to charge drivers on top of what they already pay in motoring-related taxation, something the Mayor would need to try to avoid if it is to work in the capital.

"But in the longer term, road pricing may be a viable solution to replace the current London charging regime because of its ‘pay as you use’ philosophy – by its nature this is fairer than the flat rate fees drivers currently pay to enter the congestion charging zone, and future Ultra Low Emission Zone. It would require the fitting of ‘black-box’ technology into every vehicle, which would may work for residents living and using roads in Greater London, but which might be more problematic for occasional visitors driving into London from outside the capital. We look forward to the results of the feasibility study to understand just how practical such a scheme would be.

“In the short term, the Mayor must be careful in reducing the need for parking provision on new developments. There is a risk that those who need a vehicle for travelling will end up illegally parking on streets, or having to park their vehicle a long distance away from their home.” RAC comment on the introduction of the London T-Charge 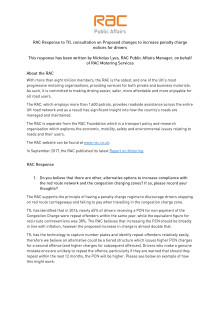 In September, Transport for London published proposals to increase PCNs for certain offences.