In 2014, motorists paid almost £40bn in road and motoring related taxation through fuel duty and VAT, VED and IPT contributions[1]. Ahead of Wednesday’s Autumn Statement and Comprehensive Spending Review, the RAC is calling upon the Chancellor to consider the following:

The RAC's David Bizley responds to the Chancellor's announcement on a continued freeze on fuel duty.

After a recent double rise in Insurance Premium Tax, this further increase is a slap in the face for motorists 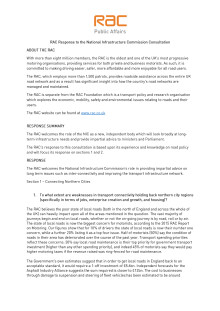 The RAC has responded to the consultation on the establishment of the National Infrastructure Commission, which had a response deadline of the 8th January 2016