“The number of fixed penalty notices issued by police forces in England and Wales for illegal handheld phone use at the wheel has, frankly, fallen off a cliff. In 2011, 123,100 notices were given; last year the figure dropped to just 16,900, a staggering 86% fall over five years. Between 2014 and 2015, 43% fewer notices were issued for the offence.

“The figures lay bare the scale of the handheld mobile phone epidemic that has been allowed to sweep across the country largely unchallenged. The simple truth is the problem of illegal handheld phone use at the wheel is undeniably getting worse, with fewer and fewer people being caught.

“RAC research released in September showed that the number of motorists that think it is acceptable to make a quick call doubled from 7% in 2014 to 14% in 2016 , while a fifth (20%) now believe it is safe to check social media on their phone while stopped in traffic. Attitudes are clearly relaxing as a result of drivers no longer fearing punishment.

“As a result of pressure from the RAC, the Government responded by announcing tougher penalties will be introduced from 2017. But we fear this alone will not be enough to bring about a change in the attitude of those motorists who continue to believe it is acceptable to use a handheld phone while driving.

“Law-abiding motorists who regularly see others using a handheld phone at the wheel, putting lives at risk, want to know that the law is being enforced. With a 27% decline in full-time roads policing officers since 2010 and little chance of an increase in numbers in the near future, we need to see all police forces giving greater priority to the enforcement of this offence.

“And better enforcement needs to be backed up by more driver education about the true dangers of handheld mobile phone use, and a heavyweight road safety campaign akin to that which has been successful in making drink-driving socially unacceptable.”

For data by police force, please refer to the table available to download below.

Your New Year’s resolution: stop using your handheld phone at the wheel

​The RAC is urging motorists to make it their New Year’s resolution to stop using a handheld mobile phone while driving.

The RAC welcomes tougher penalties for illegal use of handheld mobile phones while driving following the release of findings from the 2016 RAC Report on Motoring.

RAC reacts to figures that show 10,000 drivers have been caught twice for being distracted at the wheel

Shocking figures, including mobile phone use, reveal scale of the task to reverse relaxed attitudes of persistent offenders 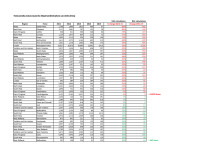