“It is too early to draw constructive conclusions from a small study over a short period. We urge the Government to support local councils by conducting a national study into the effectiveness and best practice for the use of 20mph zones in a wide variety of locations and urban environments.

“The RAC has consistently highlighted that blanket 20mph zones are not the right approach as compliance diminishes as drivers have less confidence in their necessity or effectiveness – our Report on Motoring revealed that four in ten drivers (41%) admit to speeding in 20mph limit areas. Nevertheless the RAC supports 20mph limits around accidents black spots and areas with high footfall and vulnerable road users such as around schools and hospitals.

“It is also clear that simply erecting a speed limit sign does little to change entrenched behaviours and what is required is a combination of interventions including better enforcement to ensure drivers know they are likely to be caught, an effective awareness-raising campaign, and better road design which makes roads ‘feel-like’ a 20mph limit road. There has to be scope for a smart approach to local traffic and road safety with consideration for variable speed limits, appropriate traffic calming measures and better engagement with local communities.” 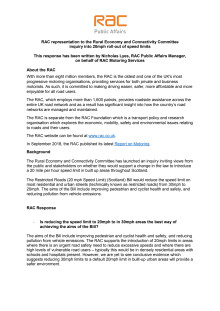 RAC submission to the inquiry, January 2019