April saw motorists suffer the biggest increase in petrol and diesel prices for 16 months, with both fuels going up nearly 3p a litre.

Not since December 2016 have average fuel prices risen so sharply. The increase then was 3p a litre for both fuels, with petrol rising to 117.23p a litre and diesel to 119.63p. The last time the average price of unleaded was as expensive at it is now was in mid-November 2014. Diesel last exceeded 126p a litre on 1 December 2014.

RAC fuel spokesman Simon Williams said: “A 12% surge in the price of oil* from $67 a barrel to $75 has cost motorists dear in April. A 3p a litre rise at the pumps is fortunately fairly unusual, but it’s definitely bad news as it means drivers are now paying 8p more a litre than they did last summer.

“The dramatic rise in the oil price and its knock-on effect on the cost of fuel is clearly demonstrated by the fact that the four big supermarkets, which sell the largest volumes and therefore buy fuel in more quickly than other retailers, have raised their prices even more steeply. A litre of supermarket petrol went up 3.2p to 120.17p, and diesel by 3.3p to 123p, signifying they are quickly passing on increased wholesale costs to motorists.

“Unfortunately, the price of oil gained $8 in April driven by a combination of international issues, all of which could negatively affect global supply. The biggest of these is the fear that the United States could re-impose crippling economic sanctions on Iran – the third largest oil producer in OPEC – over its controversial nuclear energy programme which it has been limiting as agreed with six world powers, including the US and the UK.

“The outlook for fuel prices is not good at the moment as the oil price is well over $70 a barrel, and if the US does try to re-impose sanctions on Iran and supply drops, motorists will end up paying far more at the pumps. Our current two-week prediction is for prices to go up by a penny or so, but this could quickly get worse if oil gets more expensive and the pound weakens any further.”

Northern Ireland unusually experienced the biggest increase in petrol prices with a 3.47p rise from being the cheapest in the UK at 119.47p a litre to a ‘middle of the road’ 122.94p. The West Midlands saw the smallest increase at 2.38p to 122.68p. The South East is still the most expensive place to buy petrol with a litre costing 124.05p at the end of April.

Looking at diesel prices, motorists in Scotland were subject to the biggest uplift – 3.16p – to 126.06p, which was only just worse than Northern Ireland, although drivers there can take some solace from the knowledge that they are buying the cheapest diesel in the UK at 125p a litre. The most expensive diesel can be found in the South East where a litre now costs 126.79p.

Motorway fuel prices were largely unchanged in April with a litre of petrol costing 138.43p (a rise of just 0.34p) and diesel 141.11p – a slightly larger rise of 1.13p. This means both fuels are more than 15p a litre more expensive than the average UK prices.

Average fuel prices quoted in theRAC Fuel Watch April 2018 report are based on Experian Catalist data from 2 to 30 April 2018.

Average petrol and diesel prices stay the same in March 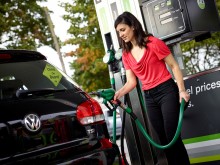 RAC sees longest run of supermarket price rises in three and a half years. UK average price of fuel has increased 8.5p a litre since end of March.