Follow The RAC Media Centre
Motorists saw the average price of fuel increase for the second month in a row in August with both petrol and diesel rising by more than 2p a litre, according to the latest RAC Fuel Watch report.

The price of petrol began to go up quickly after Storm Harvey hit the United States’ Gulf Coast on Friday 25 August disrupting oil refining facilities. This caused the wholesale price of unleaded to shoot up by 4p a litre by 31 August.

RAC fuel spokesman Simon Williams said: “Sadly, fuel prices went up for the second consecutive month in August, but the 2p a litre increase is unfortunately just the tip of the iceberg as motorists are likely to see further forecourt rises in the next week as a result of the disruption to oil refiners in Texas.

“While the price of producing petrol tends to be primarily affected by the cost of crude oil and the exchange rate as it’s traded in dollars, it is also affected by global market forces for the refined product itself and we often see the price move up and down according to supply and demand issues. This has been the case since Storm Harvey as petrol is now in shorter supply. It has also been compounded by a drop in the region’s crude oil production. There is, however, a glimmer of hope as the latest assessments from the States have revealed the damage to the oil infrastructure caused by Storm Harvey is less extensive than had been feared.

“Despite this, pump prices in the UK will no doubt rise in the coming days and we still expect to see the price of petrol overtake that of diesel, although the wholesale price of diesel is also starting to increase. This, together with an early month rise in the oil price, means the outlook for fuel prices in September is not good.

RAC Fuel Watch data for August also revealed that the average price of fuel sold by the UK’s four leading supermarkets increased by more than the national average, going up by 2.49p a litre for unleaded to 114.63p and 2.64p to 115.17p for diesel.

Wales suffered the biggest increase in the price of unleaded in August, with a litre rising 2.48p from 114.61p to 117.09p. Northern Ireland had the cheapest petrol across the month (113.96p to 116.30p) despite seeing the third largest pump increase at 2.34p. The South East had the most expensive petrol at both the start and finish of the month, closing at 117.98p a litre.

The North East endured the greatest rise in the price of diesel with a litre going up by 2.42p to 117.68p. Wales and the East Midlands were not far behind with increases of 2.40p and 2.39p respectively. Northern Ireland had both the smallest price rise at just 2.11p and the cheapest diesel at 116.93p. The South East still has the most expensive diesel in the country, closing August at 118.95p a litre.

​Fuel prices have fallen by 2p a litre for the second month in a row, data from the latest RAC Fuel Watch report reveals.

US demand for petrol following Storm Harvey is pushing up wholesale prices of unleaded which will see unleaded increase by up to 4p at UK forecourts. 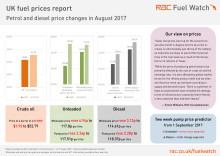