Having surveyed more than 1,500 UK car owners on their ability to cope with a winter breakdown with worrying findings, a rural insurance company is urging drivers to prioritise in-car safety equipment.

The research by the motor insurer and rural specialist NFU Mutual, showed that a huge 62% of car owners have broken down in their lifetime - that’s nearly 21 million breakdowns, given an estimated 33.6 million people drive in the UK.

Given their experience, it’s perhaps understandable that 78% of car owners choose to have breakdown cover, ensuring a rescue service if stranded.

However, a concerning number of drivers could still find themselves in a dangerous situation as the research reveals they are more likely to carry an umbrella than basic emergency safety equipment.

Shockingly, the research showed only one in five car owners keep a warm blanket or warm clothes handy, putting themselves and their families at risk of hypothermia if breaking down in freezing weather.

While half of the car owners won’t set off on a journey without an umbrella, they are also much more likely to keep chewing gum and mints in their vehicle than safety items such as red reflective warning triangles, high visibility jackets or jump leads.

The research showed that women are particularly vulnerable as they are less likely than men to keep most safety items in their car.

“It’s great that the majority of drivers have a rescue service in place, with a whopping 78% of UK car owners choosing to have breakdown cover. But when you scratch under the surface, drivers are unprepared for the call-out itself, which is a particular risk in the dark, cold weather and even more so if breaking down on isolated and unlit rural roads.

“While brollies might be among the essentials for daily British life, don’t forget the safety fundamentals such as a torch, blanket and a spare tyre to prepare for a breakdown. Keeping basic safety equipment in your car could spell the difference between a minor inconvenience and a traumatically freezing and potentially hazardous family event.

“While technology can be a real lifeline, don’t completely rely on it. Poor signal or a low battery may mean it lets you down when you need it most. Always keep an in-car charger handy, but also equip yourself with analogue alternatives including a road atlas and your breakdown service number written on a piece of paper. Familiarise yourself with safety tips and what to do in an incident, such as how to park safely or how to find an SOS phone on the motorway.”

Breakdown causes and ability to react

According to the RAC, wheel changes are the most common cause of breakdown after battery problems. So it’s alarming to find 36% of drivers don’t have a spare tyre in their car and a further half don’t know how to change one (49%), rendering them stranded and potentially in danger in the case of a blow-out. Road traffic accidents, engine management issues with modern computer-led vehicles and PNS (puncture, no spare) are also cited by the RAC as the main reasons for breakdowns.

NFU Mutual’s research found nearly three quarters (72%) don’t know what to do if their car overheats and only a third (36%) know what the arrows on the motorway (which lead towards an SOS phone each mile) mean. Only half (52%) of car owners know what to use a red warning triangle for and only 26% have one. Britain is the only country in the EU that does not stipulate mandatory use of warning triangles if breaking down.

At NFU Mutual, breakdown cover from RAC is included in its car insurance policy as standard.

Aleks continued: “With NFU Mutual, RAC Mutual Assist breakdown cover comes as part of our car policy as standard, so you don’t need to worry about it. We’re also a Which? Recommended Provider for Car Insurance and our cover is rated 5 star by independent research company, Defaqto.”

The RAC recommends drivers remember their winter ‘FORCES’. Checking these before a journey can dramatically cut the chances of a breakdown:

NFU Mutual advises on items to carry in your vehicle, packaged in waterproof bag to protect against flooding:

Top items which car owners permanently keep in their car, according to the research:

Our dedicated line for journalists is +44 (0)1454 664 123. Please note: the press office is unable to help with individual customer enquiries - please visit the RAC contacts page for the right number to call.

The RAC provides complete peace of mind to 11m UK private and business drivers, whatever their motoring needs. Its services include:

The RAC also works to support the interests of its members and UK drivers on the most important motoring issues which it identifies via the annual RAC Report on Motoring and the RAC Opinion Panel. The Report on Motoring is the longest running analysis of driver opinion in the UK having been published every year since 1989. 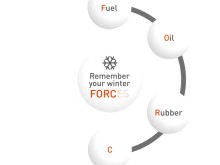 Reduce the chances of bre...