The vast majority of drivers buying new cars from 1 April will end up paying significantly more in car tax than they would do if they had bought the same vehicle just a day earlier, new figures from the RAC show.

The RAC estimates that up to two-thirds of new vehicles sold from next month that fall into three of the most popular tax bands will leave their owners disproportionately worse off as a result of sweeping changes that are being made to the Vehicle Excise Duty (VED) system. Drivers that buy a car that emits between 91g and 120g per km of CO2, such as a small family hatchback, will be up to £270 worse off over two years, and up to £680 worse off over five years than had they bought the same car before the end of March.*

Buyers that opt for an Ultra-Low Emission Vehicle, which includes some of the cleanest plug-in hybrids such as the Mitsubishi Outlander PHEV, will lose up to £145** over two years compared to someone who had bought the very same vehicle on 31 March.

Ironically, drivers that choose vehicles which emit more CO2 – between 131g and 150g per km – will still lose out, but not as heavily as those that opt for cleaner vehicles – losing an extra £50-£80 over the first 2 years to the taxman compared to now.

As a result of the change, the RAC is recommending anyone in the market for a brand new car, especially one that is adversely affected by the new tax rates, acts quickly and tries to secure a deal before the end of the month – or risk paying more in tax while they own the vehicle.

The major change in the way VED is calculated from 1 April is that the vast majority of vehicles will, unless they are pure electric and with just a few exceptions***, be subject to the same standard rate of annual tax from the second year of ownership: after paying varying amounts in year one depending on their car’s CO2 emissions, they will then pay a flat £140 per year.

With the current rates any new car that has CO2 emissions up to 140g per km pays no more than £130 a year in Vehicle Excise Duty, with more efficient petrol and diesel models paying much less; a car with emissions between 101g and 110g per km pays just £20 a year, while those cars that emit the least CO2 – between 1g and 100g per km pay nothing. Some of the most popular new cars such as the Ford Fiesta are typically advertised as emitting between 99g and 120g per km of CO2 and many will be affected by the new rates.****

Bizarrely, even new vehicles that emit much higher levels of CO2 will still be subject to the same £140 a year standard rate as those that emit a tiny fraction of the gas – although buyers of these vehicles will be hit with a surcharge of up to £2,000 in the first year of ownership. And even more strangely, those drivers who are in a position to afford a high-end electric vehicle with a list price over £40,000 will pay nothing in year one, pay £310 annually in years two to six, and then pay nothing in VED from year seven onwards.

RAC roads policy spokesman Nick Lyes said: “Aside from the complexity of the new Vehicle Excise Duty bands, the simple truth is this – from a vehicle tax perspective, drivers who opt for a car that has very low emissions including hybrids will be worse off under the new system than before. This surely runs counter to the Government’s aim which is to encourage more of us to switch to newer, lower emission vehicles.

“The Government has been taking less in tax from drivers through Vehicle Excise Duty in recent years because new vehicles are emitting lower levels of CO2, so it’s perhaps not surprising that they would want to change things to stem the decline in tax revenue.

“But what is surprising, in our view, is the confusing new system unfairly and disproportionately disadvantages those buyers who seek to do the right thing – for both the environment, and for their wallet – by opting for a small, efficient petrol or diesel vehicle or one of the latest hybrids.

“We are concerned therefore that the VED changes actually discourage drivers from purchasing some of the cleanest vehicles. Only new pure electric cars with a list price of under £40,000 will continue to enjoy being totally exempt from VED. However, the problem is that there is still no great consumer shift towards pure electric vehicles, with only 2% of motorists telling us that is what they will opt for as their next car. This may reflect concerns about battery range, charging complexities and higher initial purchase costs.

“We strongly encourage the Government to either look again at the new VED rates as soon as possible, or provide extra support for those motorists who wish to switch to lower-emission vehicles.”

Estimations do not take account of the £310 VED surcharge that applies to vehicles sold from 1 April 2017 with a list price of over £40,000, unless specified. Figures for car registrations and proportions are for Great Britain

* Based on new registrations within the current 91g to 120g per km CO2 VED bands. Estimated percentage of overall car registrations for Great Britain - 2017 figures are based upon a 2 year uniform change from 2015 proportions, based upon the 2 year proportion change between 2013-2015 continuing. This is an estimation only and an indication of changes and band movement

** Based on 51g to 75g per km CO2 VED band. The Government classifies an Ultra-Low Emission Vehicle as anything under 75g per km

**** Based upon Ford’s calculator and listings, see www.ford.co.uk/Hidden/road-tax-calculator 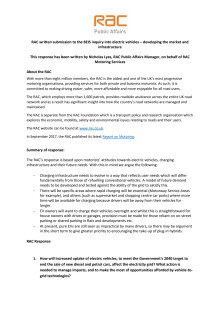 The RAC has submitted its response to the BEIS Select Committee 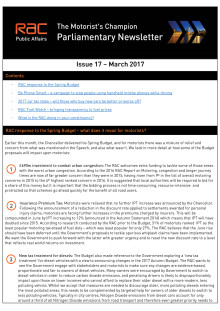 This month, the RAC looks at the impact of the Chancellor's spring Budget on Motorists, new VED rates and our new Be Phone Smart campaign