While bus lane fines can vary considerably, a conservative estimate of the total value of the penalty charge notices is a staggering £68m a year, or around £200m over the three years.**

Due to the sheer numbers of fines issued, and given that the vast majority of drivers surely do not set out to deliberately drive in a bus lane, the RAC is concerned that many drivers are being punished for accidentally doing so due to confusing or inadequate signage. As a result, the RAC is calling for a review of national signage guidelines and the introduction of ‘smart bus lanes’ to make things simpler and clearer for motorists.

Glasgow was not far behind, issuing 339,402 notices between 2015 and 2017, although the city recorded a fall in the number sent to drivers annually over the three years. Scotland’s most populous city was followed by Cardiff (267,713 notices), Bradford (208,790 notices) and Nottingham (194,993 notices) in most frequently penalising drivers for driving in a bus lane.

Inside London, of the 27 out of 33 local authorities and transport bodies that responded to the RAC’s data request, around half recorded a rise in bus lane fines issued (13 authorities) and half recorded a fall between 2015 and 2017, with the sharpest drops in the London Borough of Hillingdon (79% drop compared to 2015, with 268 issued in 2017). Of all London authorities that issue bus lane penalties an average of 11,839 penalties were issued each year per council.

The RAC believes the widespread disparities in the data may be down to a number of factors. A fall in PCNs could be an indication of drivers adhering to the rules more rigorously or perhaps improved signage, while some rises might be as a result of the increased use of existing enforcement cameras. There have also been instances where a sudden surge in PCNs have been issued over a short period of time, which should set alarm bells ringing in local authority offices that something is not right.

Interestingly, the data suggests there is no direct correlation between the number of bus lane enforcement cameras in operation and the number of penalties issued. For example, Bristol is reported to have the most enforcement cameras (51 as of 1 January 2018) and issued 48,148 fines in 2017 (944 per camera). In stark contrast to Manchester which has fewer than half the number of cameras (22 as of 1 January 2018) yet issued more than three times as many penalties (172,311 or 7,832 fines per camera). Lewisham Council had the highest total number of PCNs per camera in 2017 of any of the 53 authorities and transport bodies that responded to the RAC’s FOI, with its one bus lane camera issuing a total of 9,261 notices.

RAC spokesman Simon Williams said: “Bus lanes have a vital role to play in ensuring the reliability of public transport as they help to keep our urban areas moving. But the sheer quantity of fines – more than a million every year – suggests something is awry and we don’t believe the vast majority are knowingly breaking the rules. While there is clearly no defence for deliberately driving in a bus lane, we believe more can be done to make it obvious to drivers when they can and can’t drive in one.

“A lot of this is down to improving signage. Every city driver will be familiar with the blue bus lane sign, but on city centre streets with a lot of signage ‘clutter’ it can be very easy to miss the specific times of operation. This poses the risk of drivers straying into bus lanes when they shouldn’t be or avoiding using one when they are actually allowed to.

“We also think it is time we saw modern technology being used to make things clearer for road users, which would also have the benefit of making the best use of available road space at times when bus lanes can be used by all vehicles. Stretches of smart motorway use roadside signs to indicate which lanes are open and closed – we believe towns and cities should now consider introducing ‘smart bus lanes’ that use similar signage so drivers clearly know when they are permitted to use bus lanes.”

The fine for driving in a bus lane varies across the UK, with London levying some of the steepest charges (£160 or £80 if paid quickly), while other metropolitan and provincial areas charge much less (around £60). The law dictates that local authorities have to issue the penalty charge notice within 28 days of the offence. Motorists can then pay the fine at a reduced rate if they do so quickly.

The RAC has published a full guide to understanding fixed penalty notices.

* 53 councils responded to the RAC’s Freedom of Information Request, although not all were able to provide complete information. See 'Related / Documents' at the foot of this page for the full FOI responses

** Total figures based on a bus lane fine being £60 – the lowest known standard charge in the UK. For comparison, as of January 2018 the standard fine in London is £160. Fines are generally reduced by 50% if paid quickly, but can go up if not paid within 3-4 weeks of it being issued. 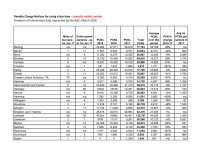 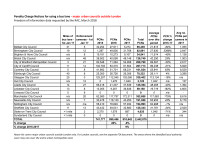