As many as 20 million individual Christmas leisure trips will take place this week in the run-up to Christmas, a study of drivers’ travel plans and congestion forecasts conducted by the RAC and INRIX reveals.*

The research suggests a staggered spread of getaway traffic throughout this week, peaking towards the weekend as large volumes of everyday commuter traffic combine with people making leisure journeys. Consequently, Thursday 20th and the festive but ‘frantic’ Friday 21st are likely to be some of the worst days with 2.5 million and 2.8 million individual journeys expected to be taken respectively.

Data from travel analytics specialists INRIX indicates Wednesday through to Friday will see some significant congestion on major roads, with drivers travelling on the M25, M6 and M40 all likely to face long delays. On Thursday, delays of up to three hours are expected on one section of the northbound M6, while on Friday part of the southbound M40 could see drivers queuing for more than an hour and a half.

However, when it comes to pure leisure journeys over Christmas, traffic is likely to peak on Boxing Day when some 6.8 million individual trips will be made as drivers cross the country to see family and friends, followed by Thursday 27th December when 4.4 million journeys are expected to be taken.

The anticipated jams will be compounded by extensive disruption to the rail network – both planned and unplanned – that could force more people onto the roads. Strikes are likely to affect routes run by Northern Rail and South Western Railway, and Network Rail is planning extensive engineering work on lines running into major stations including London Paddington and Victoria.

RAC Patrol of the Year Mark Souster said: “The run-up to Christmas is traditionally a very busy time on the roads and for us as Patrols, and 2018 looks to be no exception – although our data suggests drivers are planning on getting away early in some cases and spreading their journeys across a number of days, which would certainly be no bad thing.

“It’s vitally important every driver planning a trip gives their car a once over to make sure it’s up to the job, as a single breakdown can bring some roads to a grinding halt, slowing down the Christmas getaway for all of us. A few moments spent checking things like fuel, oil, coolant and screenwash levels and the condition and pressure of tyres could make the difference between a stress-free journey and one plagued by a breakdown. It might feel like yet another thing to think about before Christmas but it’s a fact that many of the breakdowns we see are avoidable if drivers just do these few checks before they set out.”

INRIX data scientist Joshua Kidd said: “Our data shows that compared to a normal day, Thursday 20th December will see the biggest increase in cars on the road. With most drivers setting out mid-morning, traffic will become heavier over the course of the afternoon and stay congested into the evening. But it’s not just those off to see family and friends - commuters, last-ditch shoppers and online deliveries will contribute to clogging the roads. Drivers are advised to seek out alternative routes to their destinations and use the latest technology for real-time updates.”

Highways England’s customer service director, Melanie Clarke, said: “We’re doing everything we can to make journeys as smooth as possible for this Christmas getaway and that’s why we’re keeping more than 97 per cent of our road network free from roadworks.

“We know that the Christmas period is one of the busiest times on our roads and we’d also like to remind people about the importance of checking their vehicle before setting off on their journeys. Simple things like checking your fuel and oil levels, tyre pressures and that all lights are working properly, can keep you moving and the network flowing.”

Met Office spokesman Grahame Madge said: “With millions of journeys being made over the festive holidays, we’re urging travellers to check the forecast before they travel. Winter weather can bring many risks, but knowing the forecast in advance and being aware of any potentially hazardous weather conditions you may face will help you prepare and it will make all the difference to your journey. Surprises have their place at Christmas, but it’s best to reserve them for the giving of presents, rather than being needlessly caught out by the weather.”

In full: roads expected to be worst affected 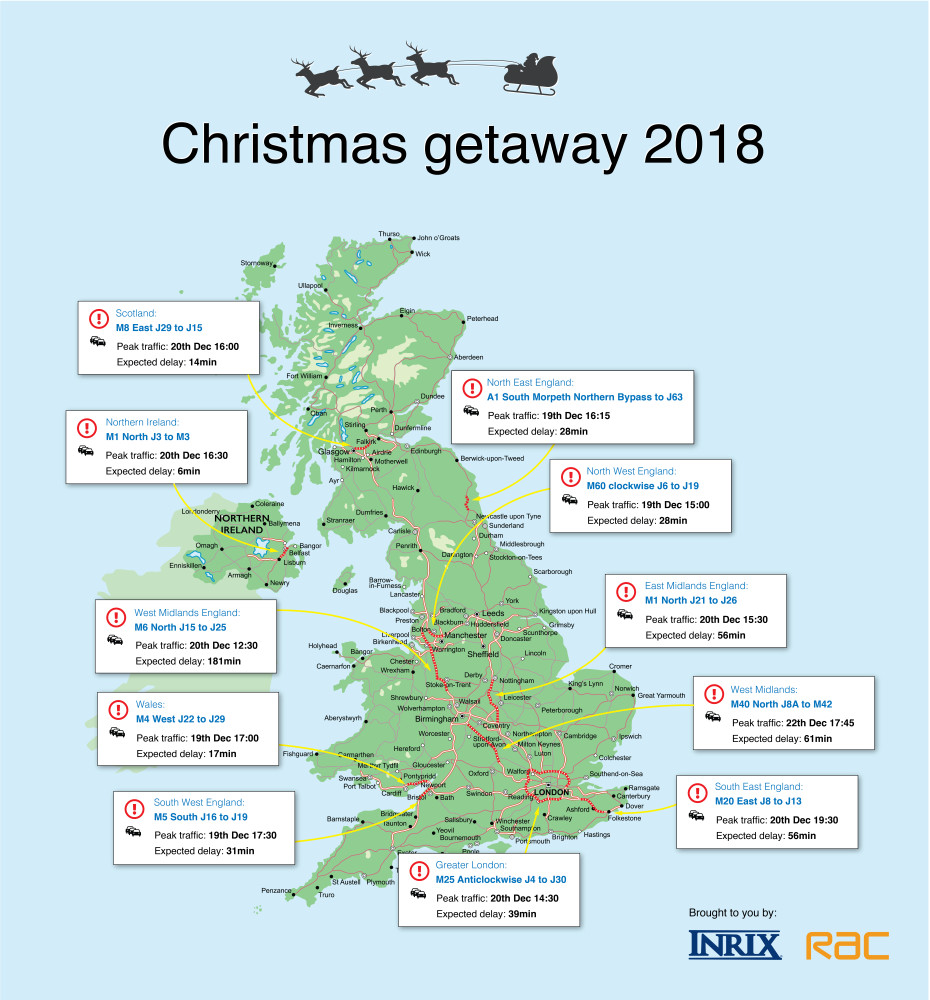 A map showing some significant congestion by UK region can be found below.

* About the data in this release: planned leisure trips based on RAC survey of drivers’ travel plans (sample size 2,400 UK motorists); congestion information based on INRIX data. Globally, INRIX analyses 500 Terabytes of data from 300 million different sources covering over 5 million miles of road. The data used is the congested or uncongested status of every segment of road for every minute of the day

The RAC Media Centre is home to all our content for journalists and news outlets: press releases and comments, the latest driving and motoring-related data and research, plus an image library