The price of fuel fell by more than 2.5p a litre in March bringing the average price of petrol down to 117.54p and diesel to 119.54p, data from RAC Fuel Watch reveals*.

RAC fuel spokesman Simon Williams said: “March brought some much-needed spring cheer to motorists with a significant 2.5p a litre reduction in the average price at the pumps. While prices were static in February, the two months before that saw 5p a litre added, completing a year of rising average pump prices. March saw the biggest fall in the price of diesel since January 2016 and since November last year for petrol.

“With longer days and the prospect of warmer weather many motorists will be making some longer journeys so lower fuel prices are very welcome but the big question is what will happen as we move towards the summer.

“Everything really hinges on the oil market and whether more is done to curb supply with a view to getting the price to rise. The Organization of the Petroleum Exporting Countries (OPEC), together with some non-members, have cut production, but their efforts have been undermined by the US ramping up its fracking production.

“The low oil price that gave rise to fuel being sold for under £1 a litre in January 2016 was all driven by OPEC over-producing to lower the oil price and stop US fracking activity but every week now more fracking rigs are coming online. This is no doubt causing a major headache for OPEC. It must decide whether to cut production further and allow the US to gain more market share as the oil price rises or reconsider returning to over producing and lowering the oil price to make fracking less financially viable and keeping its market share, albeit at a reduced price.

“The strength of the pound against the dollar is also important as fuel, like oil, is traded in dollars, but having suffered a big drop in the value of the pound after the Brexit vote the new norm seems to be a pound that is consistently worth $1.24. The absence of any further significant downward movement should mean fuel prices will be mostly decided by the oil market.”

Scotland enjoyed the biggest drop in the price of both petrol and diesel with a fall of 2.9p a litre, nicely ahead of the UK average of 2.6p. The North East has – for the second consecutive month – recorded the cheapest petrol and diesel prices in the UK with unleaded at an average of 116.50p and diesel at 118.53p at the end of March. The South East continues to sell the most expensive fuel in the land with a litre of petrol costing 118.38p and diesel 120.30p.

* The RAC Fuel Watch March report is based on an analysis of Experian Catalist average prices from 1 to 30 March 2017.

Pump prices rose by more than a penny a litre in April, but a drop in the price of oil in the second half of the month and a jump in the value of the pound means retailers are now in a position to pass on a cut to motorists imminently. Drop in price of oil and jump in value of sterling give retailers chance to pass on savings. 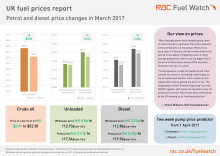