As many as 14.4m cars are expected to take to the country’s major roads from Thursday through to bank holiday Monday to make summer leisure trips, according to research of drivers’ travel intentions conducted by the RAC and INRIX.

More than 11m (11.2m) people say they have planned car journeys over that time period but another 3m (3.2m) say they will be driving but are at present undecided as to which day they will be travelling on.

Friday and Saturday are likely to be the busiest days on the road for leisure ‘getaway’ trips as RAC research* shows 3.6m cars are expected to be making journeys on both days. Thursday is estimated to be the next busiest with 3.2m cars, followed by the bank holiday Monday with 2.4m. With the extra day of the bank holiday weekend, Sunday is forecast to be quieter with only 1.6m leisure trips being made although some delays can still be expected.

Data from transportation analytics specialist INRIX** shows ahead of the bank holiday the M5 will be worst hit on Friday between J4 and J1 from 9.30am to 2pm with travel times increasing from 21mins to 1hr 21mins. On Saturday the M1 is predicted to be badly affected from J22 to J25 with journey times increasing from a typical 16mins to 62mins.

From early on Friday morning Highways England is lifting and completing more than 300 miles of roadworks on motorways and major A roads to help drivers get to their leisure destinations more easily this August bank holiday.

RAC traffic spokesman Rod Dennis said: “While the late August bank holiday is not typically one of the busiest on the roads due to it falling in the middle of the school holidays when people are already away, either in the UK or abroad, it still has huge potential to bring gridlock to major roads, especially if we were to see the sun make a welcome comeback.

“There are plenty of known hotspots on the motorway network but probably the single biggest one in the summer months is the Almondsbury interchange at Bristol, right by the RAC building, where the M5 and the M4 meet. As tens of thousands of drivers head for Devon and Cornwall the coming-together of traffic leads to regular tailbacks every Friday afternoon. Add a bank holiday and some sunshine into the mix and it’s the perfect recipe for a long wait on the motorway.”

INRIX data scientist Josh Kidd said: “The best general advice to anyone driving to spend some time away from home this weekend is to travel as early or as late in the day as possible in an effort to avoid the worst of the traffic. However, on Friday, the joint busiest day this weekend, our data suggests drivers should set off between 10:00 and 13:00 to avoid clashing with commuters and other people planning a bank holiday getaway.

“With delays expected across the country all weekend, it is great to see Highways England lifting roadworks, a move which will no doubt ease traffic conditions.”

Travel this weekend - in numbers 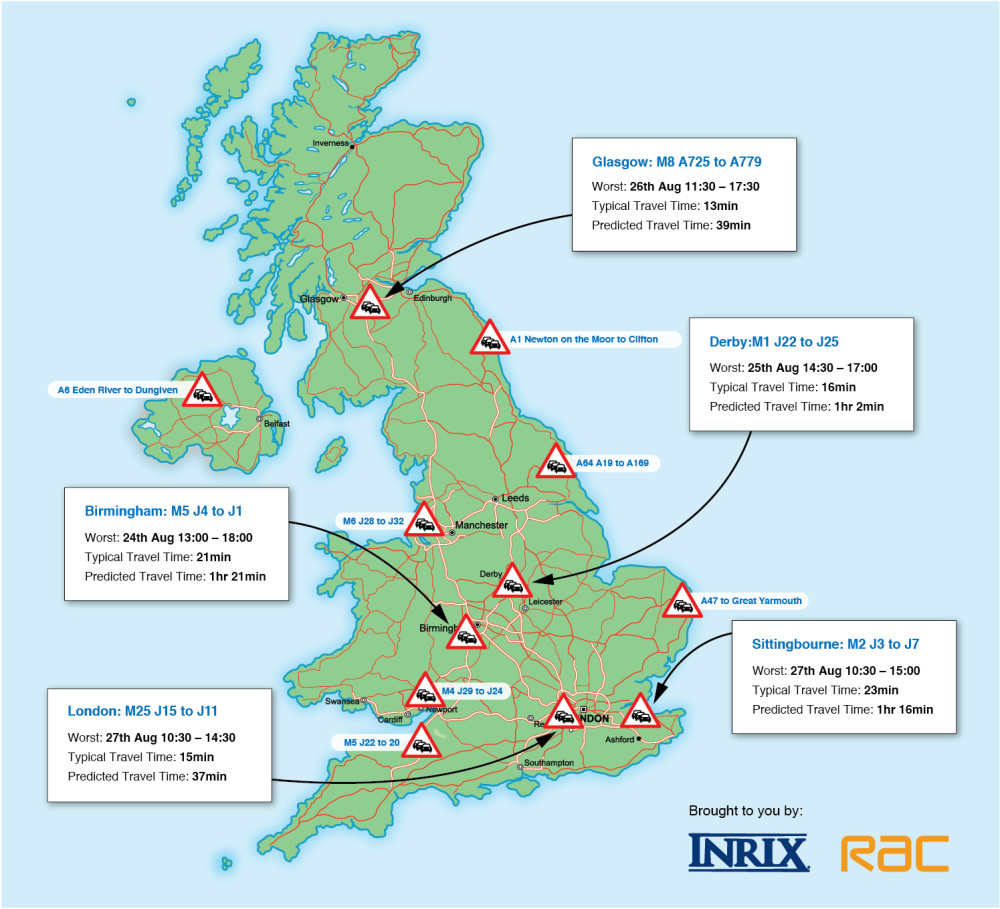 Top tips for avoiding - or just coping - with the jams

The RAC has put together a comprehensive guide on to how to avoid breakdowns experienced in warmer weather to help drivers. The RAC app, free to download for iOS and Android devices, also offers up-to-the-minute traffic information and smart route planning guidance.

* Research of drivers’ travel plans conducted for the RAC by Ragdoll Research. Base: 1,884 motorists surveyed between 9th and 15th August 2018

** This bank holiday applies to England, Wales and Northern Ireland only