More than half of the UK’s biggest airports have raised their fees for drivers parking to pick up friends or family members this summer, analysis of parking prices by the RAC has found.*

Thirteen airports have hiked their pick-up parking prices with London Luton having raised its prices by more than any other airport this year.

It now costs an initial £8 to park for of up to 30 minutes at Luton, which is £1 more than in 2017 when the minimum permitted stay was longer at 40 minutes. The airport recently closed its short-stay car park, advising drivers to use its new multi-storey for close terminal parking.

London Stansted is the second most expensive, with motorists facing an initial charge of £5.50 for a stay of up to half an hour, followed by Birmingham where the fee is £5.10 for stopping for up to an hour – with the airports raising their prices by 50p and 20p respectively in 2018.

Four airports share fourth spot with initial pick-up charges of £4, but in real terms Edinburgh is the most expensive as its fee only gives drivers a measly 15 minutes in stark contrast to both Heathrow and Gatwick which give motorists a more generous 30 minutes parking.

In terms of airports which have increased their prices the most, Southampton tops the table by doubling its initial fee from £1 to £2, although drivers can now stay for up to 15 minutes rather than the previous 10. Glasgow has raised its minimum charge by 50% from £2 to £3, with drivers now being permitted to park for 20 minutes – twice as long as before.

Motorists heading for Belfast, Liverpool John Lennon and Leeds Bradford airports will find these are the only three major airports in the UK that still permit free short-stay pick-ups – although in Northern Ireland drivers will need to be very quick at picking up as the free period only lasts 10 minutes.

While it is good news that there are far fewer price rises when it comes to using handy drop-off (or so called ‘kiss-and-drop’) zones at UK airports, the costs still remain sky-high at some airports.

London Stansted has the most expensive initial charge for dropping off, at £3.50 for a stay up to 10 minutes. But the accolade for the most expensive place to park on an equivalent ‘per minute’ basis goes to Manchester which shortly introduces charges for the first time, having previously operated a free drop-off zone outside the airport. A five-minute stay costs £3, the equivalent of 60p per minute.

These airports are followed by London Luton (£3 for 10 minutes), Liverpool John Lennon (£3 for 20 minutes) and Leeds Bradford (£3 for 30 minutes) when ranked by price.

Other than Manchester, which begins charging for drop-off parking this year, Southampton is the only airport to increase its standard fees, doing so by £1 but giving drivers an extra five minutes parking from the previous 10 minutes.

It is worth highlighting that four of the UK’s biggest airports meanwhile still allow drivers to drop off passengers free-of-charge outside their terminals – they are: London Heathrow, Gatwick, City and Cardiff.

Drivers also need to be very wary of overstaying in any drop-off zones, with fees quickly rocketing after a minimum stay has been exceeded at many airports. Leeds Bradford charges £9 for stops of between 30 and 60 minutes, while those overstaying at London Luton, London Stansted and East Midlands are effectively put on a meter after the maximum stay is exceeded – each charge a whopping £1 for every additional minute.**

“As we enter the summer holiday season, the UK’s airports are about to see some of their busiest weeks of the year. With thousands of motorists driving to airports to pick up and drop off friends and family members many will unfortunately find themselves shocked by some of the extortionate parking tariffs operated by some airports.

“Our advice is to check parking fees and time limits well before setting out for an airport this summer so as to avoid a nasty shock.

“Drivers should also be aware of just how high some charges can be if they inadvertently stay longer picking up or dropping off than they originally meant to. We advise doing some research before heading to the airport and seeing if there are any cheaper parking options available; some airports offer more affordable spaces further from the terminal building, and some better rates for reserving a space online.

“If picking up, it is wise to make sure you know when a friend or a family member is landing and leave additional time for them to pick up their luggage.

“We also strongly urge drivers who are researching longer stay airport parking to only book through reliable parking providers – such as through an official airport website or a parking provider that is a member of the Independent Airport Parking Association (IAPA).”

RAC members can benefit from preferential rates on airport parking via its partners – for details see www.racbenefits.co.uk.

* Data collected by the RAC through research of official airport websites during June 2018. Pick up charges are based on the scenario where drivers park their vehicles and leave them to meet someone in the arrivals area. These typically are referred to as ‘short stay’ car parks, though some airports may market them differently. Our data is based on parking tariffs which the official airport websites' recommend drivers to use to park to pick up.

The RAC’s annual look at how airport drop-off and pick-up charges have changed at the UK's 22 busiest airports since 2018. Three-quarters of UK airports put up pick-up charges in 2019. More than a third of airports increase drop-off fees for drivers. London Stansted found to be most expensive for all types of short-term parking 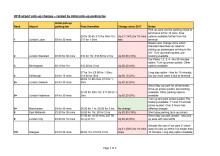