Congestion on the UK’s major roads, which carry two-thirds of all traffic, has increased in the last year according to more than half of the motorists surveyed for the 2017 RAC Report on Motoring*.

Fifty-six per cent of the 1,727 drivers questioned for the annual study said they believe traffic has got worse on motorways, high-speed dual carriageways and A-roads – a worrying finding considering that 65%** of all the motor vehicle miles are travelled on them, despite them comprising only 13% of the UK’s road network by length.

Motorways – which alone carry 21% of all traffic despite accounting for just 1% of UK roads – are seen to have suffered the greatest increase with 61% of motorists saying congestion and journey times have worsened in the last 12 months. And, more than a quarter (27%) of this 61% claim the change has been considerable. High-speed dual carriageways and urban A-roads were both felt by 58% of motorists to have become more congested. Rural single carriageway A-roads fared slightly better with only 45% stating congestion had worsened.

In terms of the greatest motoring concerns highlighted by drivers in the 2017 Report on Motoring, 8% of drivers cite traffic congestion and slower journey times as their number-one worry from a list of 23 common motoring concerns, making it the joint fifth highest ranked issue in the annual RAC survey. The only bigger concerns are the illegal use of handheld mobile phones at the wheel (16%), the condition and maintenance of local roads (10%) and the cost of fuel (9%). The cost of insurance was also cited by 8% of motorists as their top concern.

Concerns about slower journey times are even more pressing among those who drive for work with 11% of business drivers identifying this as their number-one concern.

Government statistics support the concerns of motorists that emerged in research for the Report on Motoring as road traffic estimates for 2016 show motorists drove 252.6bn vehicle miles, which is a 2.2% increase on the previous year and the highest annual car traffic estimate ever. These figures go some way to explaining why Highways England has reported a small increase in average delays in journey times on the strategic network since 2014/5.

“We also believe tackling congestion in the UK’s towns and cities can make an important contribution to improving air quality. The RAC urges local authorities to consider all possible measures – including better traffic light sequencing and installing speed cushions for traffic calming in preference to speed humps – to improve urban traffic flow and average speeds.”

Motorists were also asked about the causes of worsening congestion. While a general increase in traffic volumes was largely blamed for increasing urban congestion, reasons given for greater motorway traffic included major roadworks (47%), middle-lane hogging drivers (45%) and lorries overtaking other lorries (40%).

Of the 61% of drivers who have seen motorway congestion worsen, almost half (48%) of the 61% think there should be tighter controls on lorries overtaking other lorries.

Among urban drivers, there is some discontent over the perceived encroachment of bus and cycle lanes into space that was previously available for all road users. Almost a third (29%) thought that bus lanes are primarily to blame for congestion in towns and cities, while 16% blamed cycle lanes.

Of the 29% blaming bus lanes, two-thirds (68%) think other vehicles should be allowed to use them at certain times – a policy already applied in some parts of the country

And, more than half (54%) of the motorists who say cycle lanes are the main cause of congestion think that cyclists should be compelled to use such lanes where they are available.

David Bizley added: “Motorists’ perceptions about there being more traffic on the road are entirely understandable given that Government statistics clearly show traffic volumes are increasing.

“While traffic congestion has, not surprisingly, been a source of frustration for drivers over many years, concern rose sharply in 2016 and has remained at the same high level in 2017. More than a quarter (26%) of drivers surveyed cited congestion and slower journey times as one of their top-four motoring concerns, whereas in 2015 this figure was just 18% – a level that had not changed for several years.

* The RAC Report on Motoring 2017 is based on a largescale online survey of 1,727 motorists carried out on the RAC’s behalf by Quadrangle. 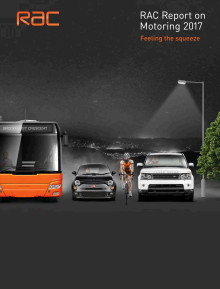 The full 2017 report, including a foreword from Ross Brawn 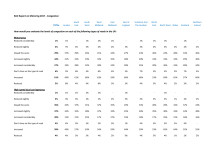