Nearly a quarter of a million vehicles were broken into in 2016, with 26 police forces – more than half of all those in England, Scotland and Wales – seeing more thefts from cars than the previous year, according to data seen by RAC Insurance*.

RAC Insurance director Mark Godfrey said: “Even though police data shows the number of thefts from vehicles has fallen by 9% in the three years from 2013, it is very worrying to see that more than half of British police forces have witnessed a rise in this type of crime from 2015 to 2016.

“Breaking into cars to steal things causes motorists no end of headaches. Not only do they lose and have to try to replace their valued possessions, most will have to make an insurance claim to get their car repaired. While this can be a time-consuming and stressful process in itself, its effects will unfortunately be felt for years to come with increased annual premiums and having to declare the claim for three years whenever arranging a new car insurance policy.

“A lot of people breaking into vehicles will be opportunist, with thieves looking for items that they can sell on easily. It’s also possible that drivers have become more complacent about what items they leave on display, perhaps believing items like satnavs are now so commonplace they’re not of interest to thieves. Some may believe the fact a vehicle is alarmed makes it safe, but unfortunately this is not the case as very few people respond to the sound of a car alarm, perhaps because so many seem to go off for no apparent reason which in itself can be a tactic used by thieves.

“And with lots of drivers using their smartphones as satnavs there is a higher probability of accidentally leaving a phone in a cradle and giving a thief a great opportunity to profit. The fact remains that every time a driver leaves a valuable item clearly on display they are running the risk of becoming a car crime victim. So the old advice of making sure nothing of value is left on display inside a car is still as valid as ever, but it is also important when parking in public places to try to opt for well-lit and well used spots so as to make it harder for criminals to break in without being seen.

“Anyone unlucky enough to suffer a vehicle break-in should report it to the police as soon as possible and obtain a crime reference number which will assist with the subsequent insurance claim.”

Drivers looking for advice on how to avoid being a victim of car crime can look at the RAC’s online guide.

* RAC Insurance made a freedom of information request to all 44 British police forces about thefts from vehicles from 2013 to 2016. Two forces –South Wales Police and Sussex Police did not provide any data. Two others – Gwent and Warwickshire – were only able to provide data for 2014 to 2016. 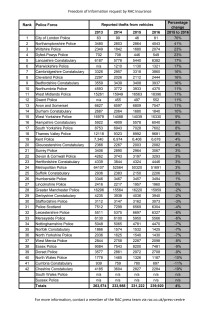