Petrol and diesel prices fell for the first time in four months in November, the latest data from RAC Fuel Watch shows*, as retailers finally passed on wholesale savings thanks to a lower oil price – but the RAC is warning drivers to expect increases at the pumps before Christmas.

Unfortunately, these lower pump prices are likely to be short-lived. Motorists should expect price rises through December as a result of the cut in oil production announced on the last day of November by OPEC, the Organization of the Petroleum Exporting Countries. The market reacted instantly with the price of a physical barrel of Brent crude closing trading up 7% at $49.09 on 30 November and up a further $3.40on the first day of December to $52.49. And, sadly for motorists, this will almost certainly lead to further increases in the coming days and weeks.

RAC fuel spokesman Simon Williams said: “While November was a good month for fuel prices with the first reduction for four months, it looks as though motorists are about to have an unwelcome early Christmas present in the form of higher prices at the pump. This is a big change from the last two Decembers when drivers benefited from falling fuel prices.

“Given retailers were relatively slow to pass on wholesale price savings to motorists last month, despite the RAC’s calls for a cut, we will be monitoring closely to see if forecourt prices now rocket as a result of the recent leap in the price of oil.

“The medium-term outlook for prices is, however, much harder to predict. OPEC has not cut supply for eight years and since mid-2014 has been actively operating an oversupply strategy to keep the barrel price low, to make it unviable for the United States to produce oil from fracking. This week’s production cut appears to be a move away from that and unusually is supported by Russia, which is not a member of OPEC.

“What happens to the oil price in the next few weeks as the markets react will be crucial and could set the tone for what happens to prices early into 2017. If the US now responds by increasing its output, prices may not rise as sharply as some are predicting. It is also important to remember that the OPEC cut is currently only in force for six months.

“Drivers should remember that while the oil price is the biggest variable affecting fuel prices, it is not the only one. With fuel traded in dollars, the dollar/sterling exchange rate also has a bearing on what retailers pay, and in turn what we pay when we fill up. A weaker pound, as we have seen since the EU vote, can see forecourt prices rise but a stronger pound can do the reverse. The unprecedented political situation on both sides of the Atlantic has the potential to buffet the exchange rate significantly through next year.

“With the Chancellor rightly choosing to extend the freeze on fuel duty in last month’s Autumn Statement, with the rate remaining at 57.95p per litre, at least motorists won’t be hit with extra tax on fuel next year.”

Wales was not only the cheapest place to buy petrol at the end of November, with the average price of a litre of unleaded selling for 113.12p, but it also enjoyed the biggest fall in price through the month (down 3.58p).

The South East remained the most expensive region for both petrol and diesel, with the average litre of unleaded costing 114.56p, and diesel 116.88p. Northern Ireland was selling the cheapest diesel at 115.3p per litre, but it was East Anglia that recorded the sharpest drop in diesel prices, down 2.7p to 116.61p per litre.

* The core data for the November RAC Fuel Watch report is based on an analysis of Experian Catalist average prices from 1 to 30 November 2016.

The RAC's calls for a cut in the price of fuel at the pumps, as wholesale fuel costs fall

Petrol and diesel prices rose by around 3p a litre in December taking them to their highest average prices since July 2015, new data from RAC Fuel Watch shows 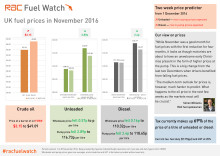