Petrol and diesel prices rose by around 3p a litre in December taking them to their highest average prices since July 2015.

The wholesale cost of both fuels rose nearly 4p a litre as a result of oil production cuts announced by the Organisation of the Petroleum Exporting Countries at the end of November. This led to oil rising 11.75% from $49.09 on 30 November to $54.86 on 30 December, with the price going back up through the $50 a barrel mark for the first time since late October. The price of oil is more than double what it was in January 2016 when a low of $26 a barrel was recorded.

Consequently, it now costs £8 more for a tank of petrol than it did at the same time last year and £10 more for diesel based on the end of January low price of 101.05p a litre.

Interestingly, throughout December the average price of a litre of supermarket fuel increased more than it did among all retailers – 3.34p for petrol and 3.16p for diesel compared to 2.99p and 3.07p nationally.

RAC fuel spokesman Simon Williams said: “The rising oil price is bad news for motorists as it caused a nasty jump in pump prices in the most expensive month of the year.

“While forecourt prices rose by 3p a litre in December as the RAC predicted, they didn’t rocket as others had forecast. The big question now is how much further are they likely to go up, particularly in the long January wait to the next payday.

“So far the price rises we’ve seen are purely down to the announcement at the end of November that OPEC and non-OPEC countries would be cutting oil production this month. Everything now depends on the strength of the deal and each country sticking to the agreed production levels. Russia will be of particular interest as it is currently producing at near record levels.

“We are optimistic that prices will not increase by another 3p a litre in January based on what’s going on with oil and wholesale fuel now, but if in the months ahead the barrel price was to get nearer to $60 and the pound was to weaken further then that would be the worst possible combination for motorists.

“Our current forecast for the next two weeks is for petrol to be around the 118p mark and for diesel to go up to around 121p a litre. We should also say that we need the pound not to lose any more value against the dollar as fuel, like oil, is traded in dollars.”

By the end of December Northern Ireland was the cheapest place to buy petrol, with the average price of a litre of unleaded selling for 115.58p, but it also saw the smallest increase in price through the month at 1.9p a litre.

The South East remained the most expensive region for both petrol and diesel, with the average litre of unleaded costing 117.84p, and diesel 120.28p, but Scotland saw the biggest jump in the petrol price at 3.75p a litre. Northern Ireland also had the cheapest diesel at 117.88p per litre and the smallest increase in the diesel price at 2.71p a litre.

* The core data for the December 2016 RAC Fuel Watch report is based on an analysis of Experian Catalist average prices from 4 to 29 December 2016.

The RAC warns motorists to expect fuel price rises in December, but the outlook for 2017 is much less certain 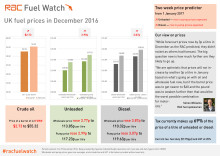