The cost of petrol fell in October ending three consecutive months of increases, but the good news is likely to end there as price rises are looming large due to the oil price going above $60 a barrel for the first time in more than two years (2 July 2015).

A barrel of oil saw a 9% increase finishing the month $5 higher at $60.98. Even though sterling remained comparatively strong against the dollar averaging $1.32 in October it is unlikely to be enough to prevent some pump price rises due to the rising cost of oil.

RAC fuel spokesman Simon Williams said: “At the start of October there was a 6p saving in the wholesale price of unleaded which retailers eventually passed on to motorists in pump price reductions. This month, however, the situation is reversed and the petrol wholesale price has gone up by 4p.

“Inevitably, this increase will be passed on to motorists on the forecourt far more quickly than the cuts were made last month, but that is unfortunately the nature of ‘big’ fuel retailing: pass on wholesale rises quickly and cling on to savings for as long as possible.

“Motorists may yet be spared from large pump prices if the United States takes advantage of the higher oil price to bring more fracking rigs online as this will bring more product on to the market, no doubt easing the barrel price.

“The US is already exporting two million barrels a day when not so long ago it was a nett importer of oil. OPEC, the Organization of the Petroleum Exporting Countries, is unlikely to welcome this as it is doing its best to limit supply to make the oil price go up. Unfortunately for motorists, a return to the OPEC oversupply strategy that caused the low pump prices of early 2016 doesn’t seem likely.

“Eyes will also switch to the Chancellor who delivers his Budget this month, and with higher wholesale costs filtering down to the forecourts, the last thing they’ll want to see is an increase in fuel duty. We urge the Chancellor to resist this and leave the rate unchanged.”

The average price of a litre of unleaded at the UK’s four biggest supermarkets is 114.81p – 1p less than it was at the start of October, while diesel is nearly a penny more expensive, going up from 116.82p to 117.72p.

Wales saw the largest drop in the price of unleaded in October with a litre coming down by a penny to 117.62p. Northern Ireland saw the smallest increase, at the same time keeping its title as the cheapest place to buy petrol with a litre costing only 117.41p on average. The South East was once again the most expensive at 118.65p a litre at the end of October.

For diesel Scotland suffered the greatest increase at 1.03p taking an average litre to 121.27p. It was only slightly cheaper than the South East which had the dearest diesel at 121.39p. Northern Ireland had the cheapest at 119.62p.

* Average fuel prices quoted in theRAC Fuel Watch October report are based on Experian Catalist data from 2 to 31 October 2017. Wholesale prices were analysed over the same period. 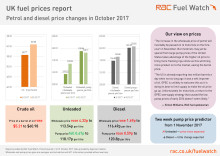