The number of vehicles stolen in England and Wales has increased by a shocking 30% in just three years, according to data seen by RAC Insurance*.

Perhaps unsurprisingly, more vehicles are stolen in London than anywhere else in the UK with 26,496 thefts being reported to the Metropolitan Police Force in 2016 – this equates to nearly a third of all vehicles stolen (31%). Similar to the national trend, this represented a 29% increase on 2013 when 20,565 were stolen.

Third spot outside of London in the vehicle theft table is the Greater Manchester police force which saw 4,999 stolen vehicles in 2016. Fourth was Essex on 3,623 and Thames Valley Police was fifth with 2,799.

RAC Insurance director Mark Godfrey said: “Unfortunately, these figures show a very unwelcome rise in the theft of vehicles from much lower numbers in 2013. Technology advances in immobilisers, keys and car alarms had caused the number of vehicle thefts to decrease significantly from more than 300,000 in 2002*** but sadly they have now increased after bottoming out in 2013 and 2014.

“We fear thieves are now becoming more and more well equipped with technology capable of defeating car manufacturers’ anti-theft systems. This is bad news for motorists as it has the effect of causing insurance premiums to rise at a time when they are already being pushed up by a variety of factors, not least the recent change to the discount rate for life-changing personal injury compensation claims and the rises in insurance premium tax.

“Drivers can also take certain steps to reduce the likelihood of their vehicle being stolen, for example parking in well-lit areas, not leaving anything valuable on view inside and, of course, never leaving the keys in the ignition when they’re not in the car, something that tends to happen on cold mornings when de-icing vehicles.

“In addition, anti-theft devices such as steering wheel locks which were popular in the 1980s and early 1990s are starting to make a comeback as they are still a very effective visible deterrent. This is quite ironic as they were replaced a number of years ago by alarms and immobilisers, which until now, offered better theft prevention.

“Telematics – or black box – technology is another potentially useful weapon in the fight against car theft. We have seen several instances where we have been able to track stolen vehicles using RAC Telematics devices and have even helped the police recover vehicles successfully.”

The RAC is a leading player in the telematics or ‘black box’ field providing businesses with the capability to monitor the health of the vehicles in their fleets as well driver behaviour to better control costs. In addition, RAC Black Box Car Insurance offers motorists, particularly young drivers, affordable insurance policies.

RAC Black Box Car Insurance works via a matchbox-sized device which tracks speed, braking and acceleration along with where and when the policyholder drives in order to calculate how safe they are through a Driver Score. Unlike some telematics policies, there are no curfew or mileage limits so the policyholder is free to drive when, where and how far they like.

The RAC telematics black box is fitted free of charge in approximately an hour at a time and location convenient to the policyholder. The telematics box also includes the RAC’s patented accident detection technology, which correctly detected 92% of accidents in Transport Research Laboratory tests, even at speeds as low as 5mph, in contrast to most other boxes on the market which identify around 50%.

* RAC Insurance made a freedom of information request to all 44 British police forces about: theft of vehicles, theft from vehicles and vandalism of vehicles. Three forces – Sussex Police, South Wales Police and Police Scotland did not provide data. The full data table can be downloaded from the bottom of this page

** Crime in England and Wales figures compiled by the Office of National Statistics show there were 92,800 vehicle thefts in 2016.

*** Office of National Statistics as quoted in www.telegraph.co.uk/finance/newsbysector/transport/11558743/Number-of-cars-stolen-in-the-UK-falls-to-48-year-low.html 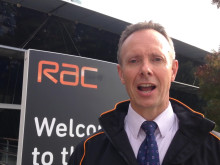 What can drivers do to re... 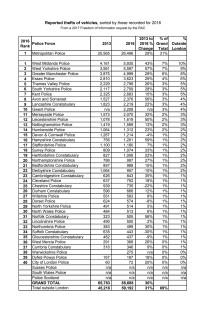