The average price of petrol fell by nearly 2p a litre in May while diesel tumbled by 2.5p after retailers finally passed on savings in the wholesale price of fuel, data from the latest RAC Fuel Watch* report shows.

RAC fuel spokesman Simon Williams said: “Having seen petrol and diesel prices rise in April, May brought some lower prices at the pump just as motorists sought to make the most of the warmer weather by taking to the road.”

May’s price reduction was led by the supermarkets with a series of cuts which came about after the RAC pointed out that the wholesale cost of fuel had fallen and that forecourt reductions should be passed on to motorists. This can quite clearly be seen in the average price of supermarket petrol which fell 2.18p a litre to 113.48p in May and similarly with diesel which went down by 3.26p to 114.19p.

Simon Williams added: “It’s good news to see prices reduce in May, but it’s very difficult to know which way they will head next although current indications are for prices to come down, especially for diesel which is still overpriced on many forecourts.

“OPEC (the Organization of the Petroleum Exporting Countries) is trying to counter the oversupplied oil market with a view to making the barrel price rise. It agreed in May, together with a number of non-OPEC producers including Russia, to continue to cut daily production by 1.8m barrels as has been happening since the beginning of the year. However, this level of output restriction does not appear to have had the desired effect to date, partly due to the slightly higher oil price enabling the United States to increase its fracking activity and fill the gap.

“The fact OPEC didn’t limit supply further could bode well for motorists. The other key factor that affects the price we pay for fuel at the pump is the strength of the pound as fuel, like oil, is traded in dollars. It remains to be seen what will happen to sterling after this week’s General Election and in the ensuing Brexit negotiations with the EU, but a further reduction could lead to higher prices on the forecourt.”

Northern Ireland experienced the biggest fall in the price of petrol, down 2.5p from 117.98p a litre to 115.47p, making it the cheapest in the UK. The South East had the most expensive petrol in the land at 117.25p despite a 1.95p reduction on its forecourts.

The East of England enjoyed the greatest reduction in the diesel price with the average cost dropping 2.68p to 118.14p a litre despite recording the second most expensive price in the UK. Northern Ireland saw the cheapest diesel at 116.46p and the South East the most expensive at 118.43p.

* Average fuel prices quoted in theRAC Fuel Watch April report are based on Experian Catalist data from 1 May to 31 May 2017. 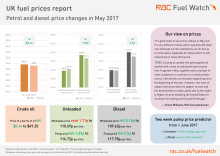