RAC Patrol Ambassador, Chris Burgess, says he is pleased with the results of his first MPG Marathon, as he succeeded in beating the official figures for his VW Transporter T6 - while it was fully loaded.

The RAC Patrol was one of a dozen vehicles taking part in the fuel-efficiency challenge this week, taking on hundreds of miles and a range of road conditions, from windy country lanes to main roads and motorways.

The event is well-established as a reliable ‘real world’ test of the fuel efficiency claims made by motor manufacturers of their vehicles.

But while all those entering the competition ensured they were carrying as little weight as possible to ensure maximum efficiency, Chris’s van was fully loaded with the 500 parts and tools he usually carries when assisting members at the roadside.

Despite the three ton load of the van, Chris managed to beat the official manufacturer’s MPG of 45.60 (based on an empty vehicle) and finished with the figure of 46.90, an improvement of 2.85%.

Chris, who has been a patrol for 17 years, said: “I’m really pleased with the result we got from the van, as I was hoping to get around 45mpg which I knew would be tough given it was fully loaded.

“Over the two days I was concentrating on keeping my speed at a constant point, so as not to use too much fuel, and luckily we didn’t hit too much traffic or get caught in a queue on the motorway sections. It really was a case of every drop counting!”

Chris, aged 42, a father of three from Newbury, was joined by colleagues from the RAC Fuel Patrol team who were supporting drivers throughout the event which was based at the Forest of Arden Hotel in the West Midlands.

RAC Fuel Patrol Paul Bird and Fuel Patrol team manager Wayne Gooch were on hand to accurately measure the volume of fuel in the tanks of the competitors’ vehicles before and after each stage, as well as making sure all the vehicles met manufacturer’s specifications.

For more information about RAC Business products and services, go to: http://www.rac.co.uk/business

RAC is one of the UK's most progressive motoring organisations, providing services for both private and business motorists, as well as campaigning for a fair deal in key areas of motoring such as the cost of fuel and the state of the roads.

RAC Patrols repair vehicles on average within 30 minutes at the roadside and carry more than 500 parts and tools, so we’re always well-equipped and ready to fix wherever possible

RAC Business offers a comprehensive range of services and products for UK businesses of all sizes and currently provides cover to around six million vehicles.

RAC press releases, news alerts and a wealth of motoring research is available from www.rac.co.uk/press-centre/. 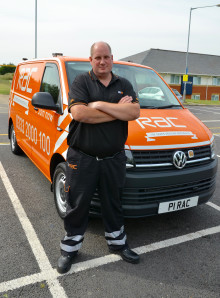 RAC Patrol of the Year, Chris Burgess, will be joining the line-up of competitors for this year’s MPG Marathon, and says he’s looking forward to putting his new VW Transporter T6 through its paces.