The UK’s major roads are set to become a motoring battleground this Friday evening as an eager 2.6 million* holidaymakers beginning their summer break clash with weary commuters trying to find their way home.

The combination of families setting off to begin a holiday as soon as the school bell rings, the usual commuter traffic, plus rumours of a further heat wave next week, means that Britain is gearing up for its very own ‘Black Friday’ on the roads – a term typically used to describe the day when French autoroutes descend into grid-lock with summer holiday traffic.

RAC data shows Saturday will see even more of us on the road, with 2.9 million getting behind the wheel, but with journeys likely to be more spaced out throughout the day, motorists might have a slightly better chance of escaping the queues.

In total, the RAC estimates some 7.5 million motorists will be packing the boot and setting off to enjoy a break between Friday 17 and Sunday 19 July.

Figures also show that ‘staycations’ look out of favour with Brits this year, with 44% of car owners not planning a UK summer break by car at all – suggesting that more of us will be jetting off to seek some summer sunshine abroad.

RAC head of external affairs Pete Williams said: “Our data shows that summer holiday traffic is going to be concentrated on our roads this coming weekend, causing gridlock and delays for many on the busiest ‘getaway’ routes. We’re expecting ‘Black Friday’ to be particularly hectic, as the majority of families will be squeezing their journeys into the end of the day.

“Our advice is to try to leave first thing on Friday, or set the alarm clocks early on Saturday or Sunday and get away before traffic builds. The usual coast-bound routes like the M5, A30 and A303 south and west into Devon, the M6 (both southbound, and northbound towards the Lake District) and the M1 are all likely to see traffic jams.

“Routes to Britain’s seaports will also be subject to delays – and motorists will be hoping that their journeys to the Continent aren’t disrupted by striking French port workers or Operation Stack kicking in once again on the M20 in Kent.

“The latest weather forecasts suggest a pretty changeable start to the school holidays. So while overheating engines and air conditioning might be less of a problem than in previous years, it still pays for motorists to do a quick check of their car before setting out. It takes minutes, but could save hours of stress at the side of the road.

“Check coolant, oil and washer fluid levels are properly topped up, and tyres are at the correct pressure with plenty of tread. If you are hooking up your caravan for the first time in a while then pay special attention to the condition of the tyres, as they can deteriorate if they haven’t been used for a while. Make sure you don’t overload your vehicle, and give a passenger a spare set of keys: there’s no quicker way to spoil the start of a family holiday than having them locked in the boot.”

Anticipated worst times to travel on the roads

Roads Minister Jesse Norman has announced new plans to improve overnight lorry parking and to ease traffic in the event of cross-Channel disruption.

RAC advice for motorists heading to Dover and Folkestone 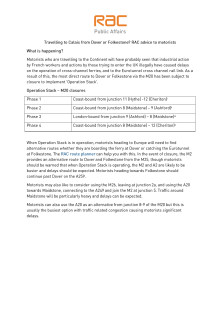