At the start of 2016, battery-related breakdowns accounted for a third of all breakdowns

Motorists are being urged to get their new year off to a strong start, rather than a non-start, by making sure they give every car they rely on a good run before the January return to work on Tuesday 3 January.

On the first working day of 2016, 4 January, the RAC had its busiest day of the year, attending nearly 10,000 breakdowns – a 40% increase on a typical day – with a third of these attributed to flat batteries. While a patrol might be able to jump-start a vehicle to get a driver on their way again, victims of a flat battery will nonetheless suffer the frustration of starting the new year being late for work.

Yet many of these breakdowns could be avoided if motorists remember to use their cars before returning to work. Just a 30 minute drive might well be enough to top up a flat, but otherwise healthy battery – sharply reducing the chances of an unwelcome breakdown at home.

RAC spokesman Rod Dennis said: “Traditionally, the first day back at work after the Christmas and new year break is one of our busiest for breakdowns. With millions of multi-car families in the UK, the long festive break often means at least one vehicle is not driven. Each of these unused cars represents a breakdown waiting to happen.

“Not running a car for a long period dramatically increases the chances of a flat battery so motorists risk starting January on a very flat note. Our advice to motorists is to give every car in the household a good run before the new working week. That way they can be much more confident of getting the new year off to a good start, rather than off to a non-start – and lessen the chances of having to ring the boss and explain why they are going to be late for the first working day of 2017.

“In 2016, we attended more than 3,000 stricken motorists who had suffered battery problems. The weather couldn’t be blamed for most these breakdowns as it was remarkably mild. If it were to be much cooler going into New Year 2017, it would make the problem worse with colder weather putting more stress on a car’s battery.”

The RAC’s tips for avoiding the battery blues this New Year: 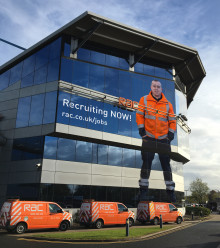 The RAC which is recruiting 80 additional patrols nationwide is holding an open day to attract qualified technicians to find out more. When: Sunday 22 January 9.30am – 3.30pm. Where: RAC, Brockhurst Crescent, Bescot, Walsall WS5 4AW.