The illegal use of handheld mobile phones is at epidemic proportions with an estimated 11 million* motorists admitting to making or receiving a call while driving in the last 12 months and a shocking five million** saying they have taken photos or videos while at the wheel of a moving vehicle.

Research for the RAC Report on Motoring 2016 has revealed that for some, attitudes towards handheld mobile use have worryingly relaxed over the last two years. The proportion of people who feel it is acceptable to take a quick call on a handheld phone has doubled from 7% in 2014 to 14% in 2016 and the percentage of drivers who feel it is safe to check social media on their phone when in stationary traffic, either at traffic lights or in congestion, has increased from 14% in 2014 to 20% in 2016. The percentage of drivers who said it was not acceptable to take a quick call at the wheel has correspondingly fallen 6% from 84% in 2014 to 78% today.

And it is not just attitudes that are shifting – actual behaviours are changing significantly too with the percentage of drivers who admit to having used a handheld mobile phone while driving having shot up to 31% which compares with just 8% who were prepared to admit this in 2014. Similarly the proportion of drivers who ‘own up’ to sending a text, email or posting on social media has risen to 19% today compared to 7% just two years ago.

The RAC’s 2016 Report on Motoring reveals that two-fifths (41%) of motorists rank the use of handheld phones by other drivers at the wheel as one of their top four concerns, making it the nation’s biggest motoring angst of 2016. The survey of over 1,714 UK motorists, now in its 28th year, starkly reveals a perplexing paradox: motorists express frustration with other drivers using a handheld phone and say it is their number-one concern in this year’s report, despite half (49%) of drivers admitting to using their handheld phone at the wheel in stationary traffic during the last 12 months, and a third (31%) who said they have used a handheld phoneto make or receive a call while actually driving. Both actions are illegal with the current penalty of a minimum £100 fine and three points on your licence.

Other uses of handheld phones

Figures for other types of handheld phone use while in control of a moving vehicle are particularly alarming: 26% admit they have checked messages while driving in the last 12 months, while 19% have written and sent texts, emails or social media updates, despite the huge distractions involved. These figures rose dramatically when the driver was in stationary traffic with 46% admitting they check messages and 38% admitting they had written texts, emails or posted social media updates.

The evidence is irrefutable that using a handheld mobile phone is a major impairment to driving, and is both a physical and a mental distraction that can result in accidents and even fatalities. Research by the Transport Research Laboratory found that drivers using a handheld mobile phone had reaction times 30% slower than those who had exceeded the current drink drive limit***. Crash statistics from the Department for Transport also show that in 2014 a driver impaired or distracted by their mobile phone was identified as a ‘contributory factor’ in 21 fatal road accidents, 84 serious and 387 slight accidents in the UK****.

The use of a handheld mobile phone while driving was made a criminal offence on 1 December 2003 when it was announced that offenders would receive three penalty points on their licence and a £30 fine rising to a maximum of £1,000.

The then road safety minister, former Labour MP David Jamieson, said: “Driving whilst using a mobile phone is dangerous. It affects the ability to concentrate and anticipate the road ahead, putting the driver and other road users at risk. Our decision to introduce this new offence will make the roads safer for us all. Missing a call won't kill you an accident quite possibly could."

Almost 13 years later it appears the numbers of offences committed is as rife as ever, if not worse, as drivers appear to be taking ever bigger risks. Newer smart phones also have the ability to distract in numerous other ways compared to those in 2003. The law and the penalty have failed to have the desired effect and the safety message has not got through to many, perhaps exacerbated by the lack of enforcement and the difficulty in catching offenders.

The RAC has frequently highlighted the problem of a lack of enforcement being a significant factor in the level of driving offences in the UK. In particular budget constraints on police forces across the country have significantly impacted roads policing and reduced the ability to catch and prosecute offenders. The number of full-time dedicated roads policing officers has declined by 27% between 2010 and 2015 reducing the number to 3,901 across England and Wales (excluding the Metropolitan Police) leaving drivers with little or no expectation that they will be caught for motoring offences other than speeding or jumping a red light where automatic cameras do the job of enforcement.

The Government is due to unveil the results of its consultation on higher penalties for handheld mobile phone use and it seems likely they will announce that the minimum fine will increase from £100 to £150 and three points will rise to four for non-HGV drivers and from three to six points for HGV drivers. However, whilst welcoming these changes, the RAC is concerned that without sufficient roads policing officers to carry out enforcement this may still do little to tackle the problem. It is calling for a ‘cultural change’ and investment in a high profile publicity campaign to drive home the dangers of using a handheld mobile phone at the wheel.

RAC road safety spokesman Pete Williams said: “There is clear evidence that the illegal use of handheld phones by drivers to talk, text, tweet, post, browse and even video call is, if anything, on the increase. It is alarming to see that some drivers have clearly relaxed their attitudes to the risks associated with this behaviour but more worryingly is the increase in the percentage of motorists who actually admit to using a handheld device when driving. The fact that drivers have little or no confidence that they will be caught when breaking these laws is a likely contributor to the problem and it is sadly the case that every day most road users see other drivers brazenly using their handheld phones when in control of a vehicle – a sight which should be a thing of the past.

“The use of handheld mobile phones is the biggest road safety concern among motorists today, and while the Government is progressing the introduction of stiffer penalties, we call on all stakeholders to step up efforts to shift cultural attitudes and make the use of handheld mobiles phones as socially unacceptable as drink-driving.

“With compliance on some traffic laws including the use of handheld mobile phones seemingly getting worse, the RAC calls for an end to cuts to dedicated roads policing and urges the Government and chief constables to give greater priority to enforcement of road traffic laws.

“The RAC is also calling on the Government to invest in a high profile awareness campaign to highlight the danger of using a handheld phone at the wheel and to drive home the message that it simply won’t be tolerated.

“Nothing makes responsible motorists hotter under the collar than the sight of other drivers ‘hanging’ on their telephone while driving as 41% rank this as one of their top four concerns and 13% said that it was their biggest worry. That is far greater than the fear of other drivers under the influence of alcohol (5%) or drugs (3%).

“We have a situation where motorists are increasingly worried about the number of other drivers who appear to be hooked on using their smartphones while driving, presenting both a physical and mental distraction and making them a significant risk to other road users and pedestrians when their attention should be fully focused on the road.

“With the advent of a new era in gaming and augmented reality apps like Pokémon Go which attracts young and old fans, we need to address the temptation which some feel unable to resist, and make the use of handheld phones while driving an absolute no-go.”

* 31% of motorists admitted using a handheld mobile phone to make or receive a call while driving in the last 12 months. 38 million registered UK drivers x 31% = 11.78 million.

*** Transport Research Laboratory research - How dangerous is driving with a mobile phone? Benchmarking the impairment to alcohol 2004

RAC press releases, news alerts and a wealth of motoring research is available from rac.co.uk/press-centre.

Illegal handheld mobile phone use at the wheel still rife

Thirteen years after the introduction of the a law forbidding use of a handheld phone at the wheel, new RAC research shows the behaviour is far from being stamped out.

Your New Year’s resolution: stop using your handheld phone at the wheel

​The RAC is urging motorists to make it their New Year’s resolution to stop using a handheld mobile phone while driving. 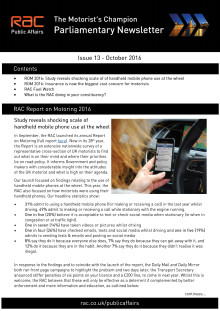 In this month's newsletter we explore two key findings from the latest RAC Report on Motoring: the significant increase in the use of handheld phones at the wheel; and motorist's concern with the high cost of insurance. There is also the latest news from RAC Fuel Watch and a round-up of RAC activity around the UK.