A new statistical analysis of the RAC’s pothole-related call-outs over the last 10 years provides strong evidence that the quality of Britain’s roads has deteriorated substantially over time.

The study, which compared the percentage share of the RAC’s pothole-related breakdowns to all other types of call-out alongside historic rainfall and frost data, revealed a 125% increase from 2006 to 2016 in the proportion of vehicle breakdowns where poor road surfaces were likely to be a contributory factor.

In the 12 months ending in June 2006, pothole-related breakdowns, such as damaged shock absorbers, broken suspension springs and distorted wheels, represented an average of 0.4% of all RAC call-outs. In stark contrast, however, at the end of the 12 months to June 2016 this percentage had risen to 0.9%.

The RAC pothole analysis also shows a striking rise in pothole call-outs in the two years from 2007 to 2009 when the RAC’s share of those breakdowns shot up from 0.5% to 1.1% – a 120% rise. A quarterly high figure of 1.6% was recorded at the end of March 2009 – a percentage not seen again until the first two quarters of 2013 which was no doubt attributable to the snowy winter. This meant that of the RAC’s 753,000 breakdowns that quarter, a worrying 12,000 were pothole-related.

Sadly, since 2013 the quarterly percentage of pothole-related breakdowns has not fallen below the 1% level when averaged over the previous 12 months.

RAC chief engineer David Bizley said: “Our analysis paints a very disappointing picture which unequivocally confirms what most road users already know, which is that the condition of our local roads has deteriorated drastically in the last decade. This analysis suggests that the quality of the UK’s roads suffered a steady decline from the start of 2007 through to the end of 2009, presumably due to lack of investment in maintenance and resurfacing during worsening economic times. Since then, injections of short-term funding have addressed the immediate aftermath of periods of extreme weather but have not been sufficient to tackle the underlying problem.

“While currently only 0.9% of the RAC’s 2.4m breakdowns in the 12 months to the end of June 2016 were of a type typically caused by potholes, there has been little underlying change since 2008. Although 0.9% seems low as a percentage of all breakdowns, the growth in this type of call-out is indisputable. With few exceptions, it’s the vehicle owner who picks up the bill for fixing the damage adding up to millions of pounds every year.

"Whilst it’s good news that the share of pothole-related breakdowns for the second quarter of 2016 does show a 40% reduction compared with the second quarter of 2015 (1.5% to 0.9%) we need to see further reductions before we can be confident that we really are improving the underlying quality of roads, and not just repairing damage from the most recent adverse weather.

“The Government has taken bold steps in recent times to ensure that the strategic road network in England (major A roads and motorways) is fit for purpose and capable of supporting economic growth. The Government has a Road Investment Strategy and has announced plans to create a Roads Fund by ring-fencing vehicle excise duty to fund future development and maintenance of major roads. However, the majority of the damage our members have suffered has been when using local roads.

“It is clear that the effects of insufficient investment over much of the last decade are going to take some considerable time to rectify. Most journeys start or finish on local roads even if the bulk of the mileage is on the strategic road network, or by rail, sea or air. Without local roads that are fit for purpose, the benefits of the Government’s bold investment in national transport infrastructure may never be fully realised.

“Bold and imaginative action is now required to address the underlying deficiencies in local roads. Existing funding arrangements are complex with central and local government sharing the cost. Whilst £6 billion has been allocated by the Department for Transport for the period 2015-2020 for local road maintenance and development, and further funding is available through the Local Growth Fund, the RAC would like to see local roads given the same priority and treated as a strategic asset.

“With a new Prime Minister and a Secretary of State for Transport now in place it seems like the perfect time for them to demonstrate to motorists that they understand road users’ concerns and transport spending priorities.”

The RAC Pothole Index* has been developed by the RAC as an ongoing monitor of the state of the UK’s roads; it shows the increase in share of pothole-related call-outs against all RAC breakdowns since 2006, corrected to compensate for the constantly improving reliability of cars.

The sorry state of Britain’s local roads was found to be the number one gripe among drivers in the latest RAC Report on Motoring. One in 10 of the 1,555 motorists surveyed for the report (10%) said the condition of local roads was their top concern, while a further 20% listed the issue as one of their top four concerns. Half (50%) believed the condition of roads in their area had deteriorated in the past 12 months with just 10% claiming it had improved; the remainder reported no change. And maintenance of existing local roads is the number one spending transport investment for motorists with 30% identifying it as their top priority and a further 48% placing it in their top five priorities.

Knowing the frustration that poor road surfaces cause motorists, the RAC has created the RAC Report Pothole app which makes the process of taking action to fix road defects straightforward and effective. The app, which uses the GPS functionality of mobile phones to locate the pothole, deliver reports direct to the roads team of the responsible local authority, or strategic highway authority in the case of strategic roads and motorways. Photographs can also be uploaded with reports.

Motorists wanting to report a pothole should visit the RAC website or download the free RAC Report Pothole mobile app for their iPhone or Android smartphone.

* The RAC Pothole Index shows the increase in share of pothole-related call-outs against all RAC breakdowns since 2006, corrected to compensate for the constantly improving reliability of cars.

Coinciding with National Pothole Day, the RAC reports that ​Britain’s potholed roads have led to a 24% year-on-year rise in the number of call-outs to vehicles likely to have suffered damaged. 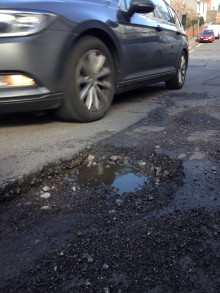 Damage to vehicles due to potholes and sitting in congested traffic are the top business bugbears for companies that run fleets, according to new research by RAC Business*. 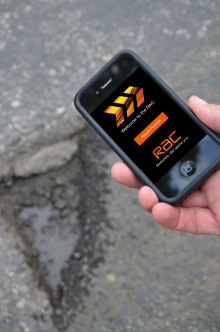 We welcome the call to address the national disgrace of potholes. However, the suggestion that bigger lorries are a major factor in the surge of potholes is something of a red herring. 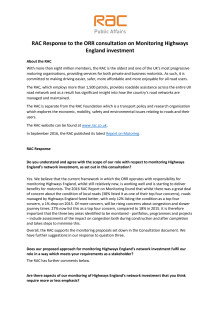 The RAC submitted its response to the ORR in September 2016