One supermarket has moved quickly to reduce its diesel price by 2p a litre and petrol by 1p as the RAC issued its April Fuel Watch figures and called on retailers to cut prices. The wholesale price of petrol fell by 3.5p during the month and diesel fell by 2.5p.

RAC Fuel Watch spokesman Simon Williams said: “It is good news that this comes just as we were calling on retailers to cut prices at the pump but there is scope for them to go deeper. However, a penny on unleaded is simply not enough.

"This is just the start and we are confident that the move will be followed by other supermarkets. It would be good if they surprised motorists with a bullish 3p a litre cut.

“This is long overdue as our April Fuel Watch figures indicate that prices should be coming down as we saw the wholesale price of petrol and diesel fall during last month by around 3p a litre.

“Motorists need to be able to trust retailers to be transparent when they are benefitting from significant savings in the wholesale price. It is time to do the right thing and drop prices - otherwise they could be accused of ‘rocket and feather’ pricing.” 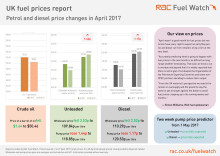