Over eight million of Britain’s 38m drivers hardly ever venture on to the motorway while 380,000 say they never do, research carried out by the RAC has found*.

Of the eight million, or one in five drivers (22%), who rarely take to the country’s fastest roads 6% admit they are just not keen to and 12% say they generally rely on someone else. The remainder (79%) claim never to have the need to use the motorway where they live and drive. Among the 1% of drivers surveyed who said they never drive on the motorway, a third (35%) confess they simply don't like the thought of driving on the motorway.

Those who are loath to drive on the motorway list a range of reasons for not doing so. Nearly seven in 10 (68%) say it is daunting because of the speed everyone is travelling at; half (52%) feel more at risk of being involved in an accident on motorways than other roads; 42% don't have the confidence to drive on the motorway; and a third (32%) find motorway driving too monotonous.

Even though some motorists have safety concerns about motorways they are statistically Britain’s safest roads despite carrying around 21% of traffic. In the year to September 2015, it is estimated that vehicles drove 65.4bn miles** on them – an all-time high figure and an increase of 2% on 2014. However, they only accounted for 96 (5.4%) of the 1,775 fatalities on Britain’s roads and 4.7% of injured road casualties.

Interestingly, the RAC research revealed there is a willingness among some of those who don’t like driving on the motorway to try to change this as three in 10 (29%) said they would be prepared to have a motorway driving lesson.

RAC spokesman Simon Williams said: “While there are many parts of the country where our 2,300 miles of motorway don’t stretch to, it is surprising to find out that so many motorists don’t, or won’t, drive on a motorway.

“Despite motorways statistically being some of our safest roads, many people still seem to rely on partners, friends and family when they need to use one. And with only 29% of reluctant motorway drivers saying they are open to taking motorway lessons, it seems that for the remainder (71%) a three or four-lane road with speeds of up to 70 mph is sadly just a step too far.

“The message to them has to be: with the right instruction and advice, plenty of care and practice, confidence in motorway driving can easily grow; at the same time, it is also important from a road safety perspective that people drive within their comfort zones so for some it may be best to stick to local roads where they are most confident.” 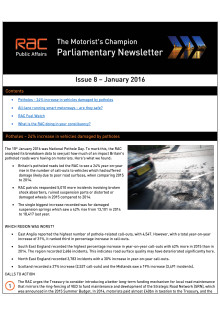 In this month's newsletter we focus on the safety of smart motorways, and the RAC's latest pothole related breakdown figures.