The cost of fuel rose for the third consecutive month in September despite the wholesale price of petrol falling 6p a litre.

Data from RAC Fuel Watch shows the average cost of a litre of unleaded went up by nearly 1p a litre (0.83p) to 119.19p while diesel increased by 1.34p to 120.31p, making both fuels the most expensive they have been since March. Both petrol and diesel have gone up 2.5p a litre since the end of June.

While prices rose in September the RAC is expecting a petrol cut from retailers in the next few days due to the falling wholesale price. The drop in the wholesale price has occurred despite oil going up 10% to almost $60 a barrel – its highest point since the summer of 2015. The effect of this would normally mean pump price rises but a slight resurgence in the strength of the pound, which rallied by 4% across the month, has counteracted this as fuel, like oil, is traded in dollars.

RAC fuel spokesman Simon Williams said: “We saw the supermarkets cut 2p a litre off petrol in late September as a result of the lower wholesale price. But there is now scope for a further round of pump price reductions as wholesale unleaded is 6p a litre cheaper than it was at the start of September.

“If the big retailers were to play fair with motorists we would see at least another 2p a litre come off unleaded at the pump. This would be good news as it would drive the price of unleaded down from 119p a litre towards 117p. Unfortunately, the wholesale price of diesel is static so we won’t be seeing any cuts there.

“With oil up to its highest price since early July 2015 motorists have been saved from steeper prices by the pound which has gained in strength. Without this drivers would be paying far more for their fuel. The late September petrol and diesel cut from the supermarkets was a demonstration of how important a favourable exchange rate is on the forecourt.” 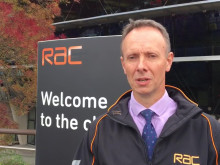 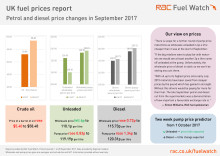