The current higher pump prices are a far cry from early 2016 when both fuels averaged 102p a litre. But – more positively, they are still considerably cheaper than April 2012 when the UK average prices of petrol and diesel reached record highs of 142p and 148p a litre respectively.

RAC fuel spokesman Simon Williams said: “Sadly, December was the month oil reached its highest point for over two and a half years – something which motorists are now feeling the effect of at the pumps.

“On a brighter note, the shutdown of the North Sea Forties pipeline did not cause the price of oil to increase as many expected. It had been feared this would lead to petrol and diesel going up in the run-up to Christmas, but luckily for drivers global oil production was not negatively affected as a result.

“It’s hard to see pump prices getting much cheaper in the early part of 2018. Unfortunately, the good times of lower cost fuel appear to be over and it’s probably now far more likely that we will see them going up as OPEC’s oil production cuts are starting to have the desired effect of reducing the global oil glut and pushing the barrel price higher.”

The North East experienced the biggest increased in the price of unleaded with a litre rising nearly a penny from 120.06p to 120.92p. Northern Ireland finished 2017 with the cheapest petrol at 120.27p and the South East with the most expensive at 121.87p.

London suffered the greatest rise in the price of diesel as a result of a litre going up 0.94p to 124.15p. This was still cheaper than the average price in the South East of 124.29p – the highest in the UK. Northern Ireland once again had the cheapest diesel at the start and end of the month with the cost of a litre hardly increasing.

* Average fuel prices quoted in theRAC Fuel Watch November report are based on Experian Catalist data from 1 to 29 December 2017 (wholesale prices) and 3 to 31 December 2017 (retail prices). 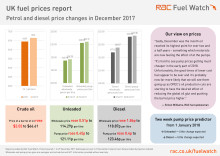